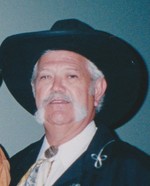 Ronald Eugene McRuiz (Rancho Ron) age 71 of Cleburne, Texas passed away peacefully at his home on August 8, 2019. Visitation will be from 4-6:00 P.M. Saturday, August 10, 2019 at Crossroads Church. A private memorial service for family will be held at a later date. Honorary pallbearers will be Billy Cate, Larry Combs, Gene Petross, Bob Richey, John Smith and Gary Beaver.
Two earth angels who were always there to care for Ron in his time of need are Janice Plihal and Charles Bottomley.

Ron McRuiz was born on February 9, 1948 in Tyler, Texas to Thelma and Albert McRuiz. He graduated from John Tyler High School in 1966, Tyler Junior College in 1968 and Baylor University in 1970. Ron taught Spanish and French at Cleburne High School, University High School in Waco, Kopperl High School, Midlothian High School and was a long time substitute at Alvarado High School.

Rancho Ron sang cowboy songs and played drums with the Chisholm Trail Cowboys. He also was a member of the Western Music Award winning group, The Texas Trailhands, singing western swing songs and playing percussion. He was a founding member of the Cowtown Opry in Fort Worth, Texas.
Playing the drums and singing in the Crossroads Church praise band was a great source of joy for him.

Ron is survived by his wife of forty five years, Holly McRuiz; son, Robin March McRuiz and wife Alison, and their son Ourson Mec McRuiz. Being “Grampy” was his most recent pleasure and his greatest source of enjoyment.

He was preceded in death by his parents Thelma and Albert McRuiz.

Ron will be missed and remembered fondly by all that knew him.

All rights reserved. This obituary is also archived at obittree.com