To share your memory on the wall of Jeannette Rigby, sign in using one of the following options:

There may be a delay while processing. Please do not click the back button or refresh while a payment is processing.

Your donation has been processed successfully

Provide comfort for the family of Jeannette Rigby with a meaningful gesture of sympathy.

Print
Jeannette Dickson Rigby, 101, passed away in Cleburne, Texas, on June 15, 2019. A graveside service will be held on Saturday, June 22, at 2 p.m. in Cleburne Memorial Cemetery. Her pastor, Kenny Rigoulet, will officiate. Serving as Honorary Pall Bea... Read More
Jeannette Dickson Rigby, 101, passed away in Cleburne, Texas, on June 15, 2019. A graveside service will be held on Saturday, June 22, at 2 p.m. in Cleburne Memorial Cemetery. Her pastor, Kenny Rigoulet, will officiate. Serving as Honorary Pall Bearers will be Robert Dollgener, Mickey McClure, Ben Oefinger, David Carter, John Langston, John Cassidy, Robert Layton, Norman Weber, Micky Rigby, Randy Rigby, Philip O. Vogel, Dan English, and Lee Denton.
Betrena Jeannette Dickson was born to Betrena (Langston) Dickson and Carlton Albert Dickson on January 16, 1918 in Cleburne. Her maternal grandparents were Margaret (Dennis) and James Langston. Her paternal grandparents were Jeannette Harriet (Webster) and Dwight Dickson. Her mother’s family had a dry goods store in Cleburne. Her father was the Postmaster of the Cleburne Post Office. At that time, the Postmaster was appointed by the President of the United States. Jeannette graduated from Cleburne High School, attended Trinity University in Waxahachie for one year, and graduated from the University of Texas in Austin. She earned a degree in English and was a member of Alpha Phi sorority.
Jeannette married Robert Davis Rigby on June 15, 1946 at her parents’ home on Featherston St. in Cleburne. Dr. and Mrs. James Curtis were their attendants. Lucy Lee Dickson played the piano. Robert was a banker at Cleburne National Bank for over 50 years. He and Jeannette traveled to many countries, often on Texas Bankers Association trips. They enjoyed 46 years of marriage before Robert’s death in 1992. Jeannette passed away on the 73rd anniversary of their marriage. A lifelong Presbyterian, Jeannette was a member of Anglin Street Presbyterian Church, now United Presbyterian Church. In their later years, Jeannette and several other widows, including her cousin Lucy Lee, sat together on the back row every Sunday and ate out together after church.
Jeannette enjoyed spending time with friends and relatives. She and Robert ate dinner with other couples after the men played golf and often drove to Fort Worth for dinner. Jeannette spent several years faithfully and lovingly caring for her mother, Robert’s mother, and an aunt while they were in a Cleburne nursing home. She was there several times each day to help with mealtime, do their laundry, and tend to anything else they needed. After they passed away, Jeannette began playing bridge and enjoyed being in several bridge clubs for many years. She enjoyed entertaining and even in her eighties and early nineties hosted weekly dinners in her home, New Year’s Eve afternoon parties, Cowboy football-watching get-togethers, and afternoon bridge clubs. In later years, she and long-time friend Mege Smith ate dinner together several nights each week. Jeannette liked anything chocolate and was very self-disciplined. She could buy a bag of Dove dark chocolates and eat just one small piece each night after dinner. She also liked to sit on her front porch with friends and caregivers to watch the cars driving by, the birds flying, and the wind blowing through the trees. She enjoyed seeing her two cats play. Singing “Love Lifted Me” and “Into the Garden” with her caregivers and neighbor Carla Oefinger was a special joy.
Jeannette was preceded in death by her parents, her husband, cousin Charlotte Ann (Collins) Johnson, second cousin Lucy Lee (Dickson) Yantis, and nephew Robert Andrew (Bobby) Rigby. Also preceding her were Robert’s two brothers and their wives - Frances (Finley) and Randall Logan Rigby, and Zelma (Grigsby) and Thomas Marshall Rigby.
Jeannette is survived by her first cousin and his wife, Rosemary and John Langston, five nieces and nephews and their spouses – Dawne (Rigby) and John Cassidy, Marsha Anne (Rigby) and Robert Layton, Mona (Rigby) and Norman Weber, Sharlie and John Michael (Micky) Rigby, and Carol and Lt. Gen. (Ret.) Randall (Randy) Rigby. She is also survived by many second cousins once removed including Evelyn and Phil Vogel, Kay (Yantis) and Dan English, and Sue (Yantis) and Lee Denton, and by dear friends and neighbors Carla (Collins) and Ben Oefinger, and Shellie (Smith) and David Carter.
The family wishes to thank her pastor, Kenny Rigoulet, and the members of United Presbyterian Church for their faithfulness in visiting Jeannette, praying for her, giving her gifts, sending cards, and for bringing communion to her on a regular basis during the years she was unable to attend church. We also wish to thank her physician of several decades, Dr. Oscar Becerra, Klarus Home Health, and Mission Hospice for their excellent care. Grateful appreciation goes to her fulltime caregivers of several years, Donna Burns and Michell Irwin. They provided wonderful care and Jeannette enjoyed their companionship very much. Though Jeannette had no siblings or children, she was blessed with a wide circle of family and friends who loved her and will miss her.
Read Less

To send flowers to the family or plant a tree in memory of Jeannette Dickson Rigby, please visit our Heartfelt Sympathies Store.

Receive notifications about information and event scheduling for Jeannette

By subscribing to updates, you will receive any notifications sent about changes to service schedules or other important information

Please add your text number or email address before submitting.

You have successfully been subscribed to notifications!

You will receive any future notification messages.

Provide comfort for the family with a meaningful gesture of sympathy.

We encourage you to share your most beloved memories of Jeannette here, so that the family and other loved ones can always see it. You can upload cherished photographs, or share your favorite stories, and can even comment on those shared by others.

Posted Jun 22, 2019 at 06:43pm
I will always be blessed for the couple times I was given opportunity to fill in for for her regular caregivers. They were short 3 -4 day intervals , we talked and talked, sat on her front porch and counted cars “ which color was most popular today... red, white , black , and silver are the most you’ll see “ she would say. She would want to go out again as the school children walked by on there way home, she would smile and wave. Sweetest lady ever. Had absolutely the best skin... for her age, the most genuine eyes. I was driving to cemetery with my regular lil patient another long time resident of Cleburne , (been caring fo six years now) and we noticed the cars so I said we gotta see what’s happening. That’s when I found out she had passed. So sorry for the loss. But what a wonderful life that lady lived. Right up to the end. So honored I was able to care for her the short few times I did. See you again Jeannette when my time comes.
Love , Kahla King Whitney Tx.
Comment Share
Share via: 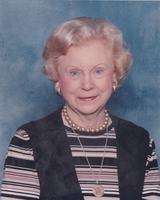