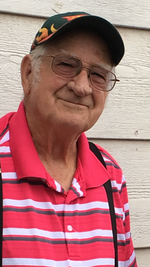 “Jack” Henderson passed away Saturday, October 19, 2019 in Burleson. He was born April 1, 1934 in Alvarado to Jack and Juanita (Hill) Henderson.
Jack married the love of his life Geneva Edwards on December 07, 1957 in Joshua. He was a veteran of the US Army. Jack was a truck driver with 32 years of service with Merchants Freight Line.

He is survived by son Ronnie Henderson and wife Tamera of Paden OK.; daughter Vicky Morse and husband Arnold of Fort Worth; 2 brothers Ted Dossey and wife Mary of Alvarado and Thomas Dossey of Alvarado; 2 sisters, Hazel Stillwell of Alvarado and Frankie Appling of California; 17 grandchildren and 37 great-grandchildren.

He was preceded in death by his wife of 61 years Geneva Henderson on April 5, 2019; 2 brothers, Tim Dossey and John Henderson; sister, Jeannie Beckham; 2 grandchildren and 1 great-grandchild.

All rights reserved. This obituary is also archived at obittree.com