To share your memory on the wall of Eulena Marruffo, sign in using one of the following options:

Provide comfort for the family of Eulena Marruffo with a meaningful gesture of sympathy.

Eulena “Lena” Gale Marruffo 49 of Burleson received her wings on Monday, August 5, 2019 in Fort Worth. Lena was a hairdresser at Hudson‘s family Barber shop in Arlington.

Lena was born November 27, 1969 in Fort Worth to Freddy Dean and Nancy Carol (Roberts)Smith.

She was preceded in death by her father Freddy Smith.
Read Less

We encourage you to share your most beloved memories of Eulena here, so that the family and other loved ones can always see it. You can upload cherished photographs, or share your favorite stories, and can even comment on those shared by others.

Posted Aug 09, 2019 at 05:03pm
Lena,
I cherish the time that I had you as my friend. You and I shared a friendship that was unique and very special to me. I am PROUD to call you my friend and I pray that you may receive peace while you dance with the Angels in Heaven.
Your Forever Friend,
Chelly Nail
Comment Share
Share via: 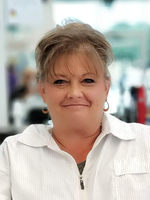