We're sorry but the candle you have selected is currenty in the process of being purchased or has just recently been purchased.

Please feel free to select another candle or check back in 15 minutes to see if the candle you have selected has been released for purchase.

We're sorry but there are no candles available for lighting.

You have already begun a candle purchase session. If you would like to continue with your current candle choice please click "Continue" otherwise please click "Select Another".

In Memory of
Elizabeth Ann
Rangel (Jackson)
1931 - 2017
Click above to light a memorial candle.

The lighting of a Memorial Candle not only provides a gesture of sympathy and support to the immediate family during their time of need but also provides the gift of extending the Book of Memories for future generations.

In the event that there is an error
in the information presented,
please contact the funeral
home by clicking here. 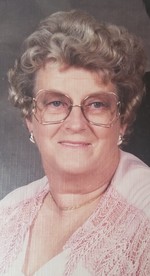 Elizabeth Ann Jackson Rangel, 85, of Venus passed away Saturday, Jan. 14, 2017 in Keene. She was born March 10, 1931 in Olympia, WA to Albert William and Anna Ely Jackson. She married Antonio Rangel on June 17, 1964 in Alamogordo, NM and he preceded her in death.
Mrs. Rangel was a homemaker and a loving mother, grandmother, great grandmother, great-great grandmother, sister, aunt, and a dear friend to many. She was of the Baptist faith.
Survivors include her children, James Orsech and wife Paula of Ore City, Tracey Kastel and husband Bill of Venus, Michael Rangel of Ft. Worth, Trisha Rangel and Tara Rangel Johnson of TX; eight grandchildren; 12 great-great grandchildren; nephew, Jame Jackson and wife Martha of San Antonio; sister, Marie Estrate of IL., and numerous other relatives and friends who will miss her greatly. She was preceded in death by her parents; four sons, Scott Martinsen, Chris Martinsen, Bradley Martinsen, and Mark Rangel; daughter, Toni Orsech; two brothers; and one sister.
The family would like to give a special thank you to Town Hall Estates for all of their loving care of Elizabeth.
A memorial service will be held at a later date.

To send flowers to the family or plant a tree in memory of Elizabeth Ann Rangel (Jackson), please visit our Heartfelt Sympathies Store.

This Book of Memories brings those affected by loss together by encouraging communication and self-expression. By giving friends and family a special place to tell their stories and express their feelings of loss, it helps them care for one another during a very difficult time. Click on any of the links to the right to access features or information within this memorial website.