To share your memory on the wall of Claude Germany, sign in using one of the following options:

There may be a delay while processing. Please do not click the back button or refresh while a payment is processing.

Your donation has been processed successfully

Provide comfort for the family of Claude Germany with a meaningful gesture of sympathy.

April 12, 1923-June 30. 2019
Claude P. Germany, Jr., age 96, lived in the area surrounding Burleson for most of his life. He went home to his Lord Sunday, June 30, 2019. Born April 12, 1923 in Parker, Texas, he was the son of the late Claude Patrick Germany and Mary Cecil Taylor Germany. Claude is predeceased by his sister Winniemae Germany Moore of Cleburne. He married Lucille Richeson Wicker on September 03, 1983. He was a Veteran of World War II and served with the U.S. Army in both North Africa and Italy. He had retired from Vaught Aircraft in 1993. During Claude’s working-years following his retirement from Vaught, he was a successful homebuilder and realtor in Tarrant and Johnson Counties. Claude became a Master Mason in 1952 as a member of Tarrant Lodge #942. At the time of his passing, he was soon to receive a 70 year award for his tenure in the Craft. During his almost 70 years of service, he became very well known to Masons across Texas. He is a Past Master of Burleson Lodge #649. It was during this time that his skills of leadership, easy-going good manner and quick grasp of the work of the Craft was realized. He became an At Large Instructor for the Grand Lodge of the State of Texas A. F. & A. M. During those many years he traveled with some of his best friends who were also Masons and Instructors as far away as Abilene and then back to Greenville Texas. If you ever met a Mason between those cities and mentioned Claude Germany’s name, you always got a smile and pleasant comment about him. Claude received the high honor by being appointed as The Grand Senior Steward of The Grand Lodge of Texas. He was the oldest Master Mason at age 92 to have ever held that office. He was a member of several Masonic Lodges at the time of his death.

The family will receive friends and family for Visitation on Friday, July 5, 2019 at 10:30 AM at The Alsbury Baptist Church at 500 N. E. Alsbury, Burleson, Texas (817) 295-0134. At 11:30 AM the funeral service will be conducted by Minister Scott Sharman. Following the conclusion of the funeral service area Masons will conduct a Masonic Service.

Afterward a procession will leave from the church to the Burleson Memorial Cemetery for burial.

The Family requests that in lieu of flowers that donations be made to Texas Scottish Rite Hospital for Children in Dallas, 2222 Welborn St, Dallas TX 75219.

To send flowers to the family or plant a tree in memory of Claude Patrick Germany Jr., please visit our Heartfelt Sympathies Store.

Receive notifications about information and event scheduling for Claude

By subscribing to updates, you will receive any notifications sent about changes to service schedules or other important information

Please add your text number or email address before submitting.

You have successfully been subscribed to notifications!

You will receive any future notification messages.

Provide comfort for the family with a meaningful gesture of sympathy.

We encourage you to share your most beloved memories of Claude here, so that the family and other loved ones can always see it. You can upload cherished photographs, or share your favorite stories, and can even comment on those shared by others.

Posted Jul 04, 2019 at 02:40pm
A very close and good friend a very good God loving Christian he led by Example I have learned a lot from Claude Prayers for Claude Germany Family
Comment Share
Share via:
JW

Posted Jul 02, 2019 at 10:19am
Oh, my dearest Claude, how I will miss you. You were the best uncle ever. You named me, and you brightened up the life of this little country girl so much. You and Opal bought me my first and only "poodle" skirt in 1952 for Christmas. You always made sure we had board games to play for Christmas too. I remember the circular track that you and Wayne and Dennis tramped out and smoothed down for your model planes out in our pasture. You gave us so much fun. I remember the movie camera and your little red convertible. I will miss having coffee with you when you came to see me here in Cleburne. Thank you for sending money to Mama and for loving her. She loved her little brother so much. I love you, and I will see you in Heaven before very long. Judy
Comment Share
Share via: 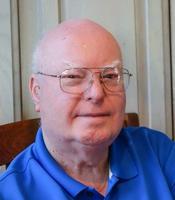